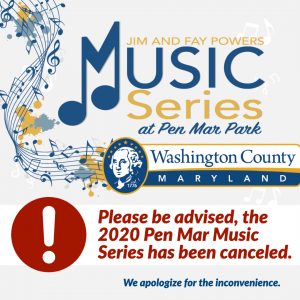 Welcome to Pen Mar Park, altitude 1400 feet, one of the finest scenic areas in Maryland. Located on High Rock Road at the Mason Dixon Line, this site was selected in 1871 by Colonel J. M. Hood of the Western Maryland Railroad and approved by the WMRR directors as the location for the development of an amusement park. After the acquisition and clearing of the land, the area was developed for the proposed park, including the building of a pavilion and a dining hall. The park was opened to the public on August 31, 1877.

The Scenic Lookout, Picnic Shelter, Children’s Playground and Multipurpose Pavilion have been reconstructed on their original sites. The locations of former attractions are identified with numbered markers.

Multipurpose Pavilion: After the reopening of Pen Mar Park on May 22, 1977, the public voiced their desire for a multipurpose pavilion. With this in mind, in 1978 a group of interested individuals from Maryland and Pennsylvania formed the Pen Mar Park Pavilion Committee with the responsibility to design the structure and raise private funds that were necessary for the construction of the multipurpose pavilion on the site of the original dance pavilion. Construction of the Pavilion was completed in 1980. It was dedicated and officially opened to the public on August 18, 1980.

The dance pavilion, with an induction loop system for the hearing impaired, is the site of Sunday dances with live music, June-September

Pavilion reservations and park information may be obtained by contacting the Washington County Buildings, Grounds & Parks Department at 240-313-2700.

The official park season begins the first Saturday in May and ends the last Sunday in October.

Park hours are from 9:00 AM until sunset.

Pavilion reservations and park information may be obtained by contacting the Washington County Parks Department at 240-313-2700.

AT&T, Sprint, Verizon, DIRECTV and Antietam Cable Television have Points of Presence within the county. Washington County is well served and several options are available for broadband services. Resources to help your household find the right internet service plan include InternetProviders.com. Cellular telephone services are available through private local and regional vendors.